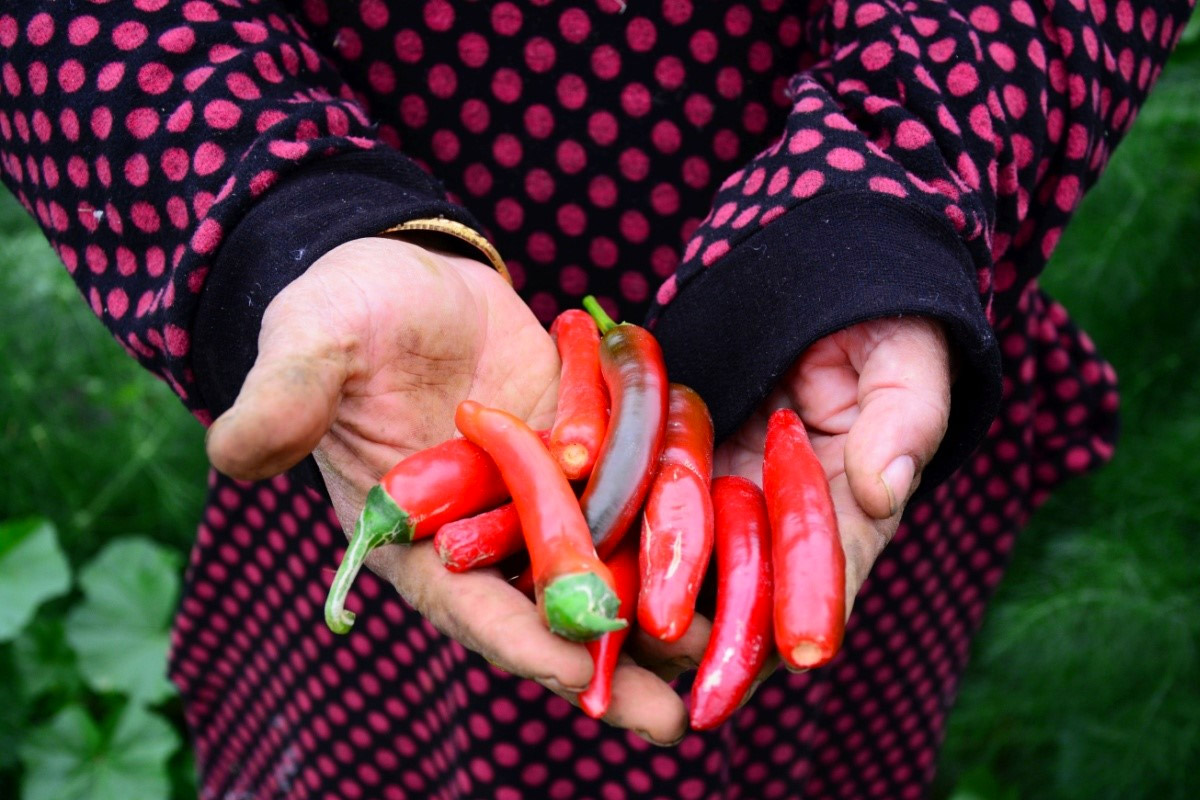 ‘Geoff taught us how to work with nature, not against it’
– Abu ElHajj

Facing drought and rising temperatures, Jordan is on the frontline of climate change. Overgrazing and inappropriate cultivation practices have contributed to increasing desertification across the region. Abu ElHajj’s mission is to green the desert in Jordan. She quit her job as a teacher in Amman in 2017 and decided to buy a small piece of land in the Dead Sea valley. Most of what I eat comes from my garden,” says Abla Abu ElHajj 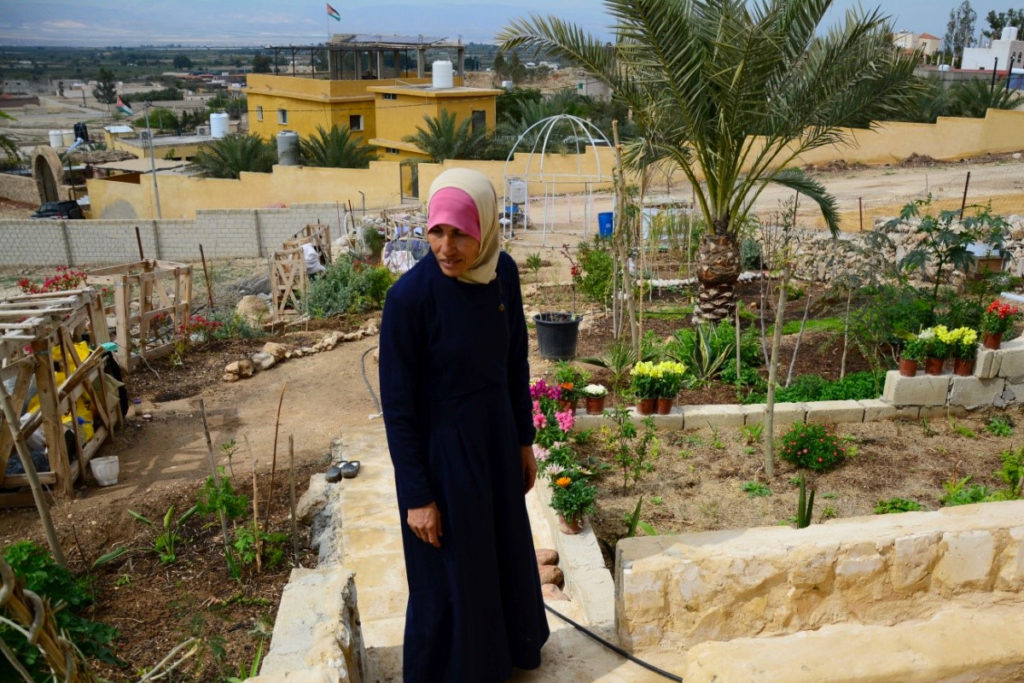 “-In a few years, I will have more fruit trees and everything will be greener and more stable,” she says.

Jordan is three-quarters desert and one of the world’s most water-scarce countries. A study published by Stanford University in 2017 found that water shortages in Jordan are likely to get worse over the coming years.The study suggests that without better land use and improved water-sharing agreements, by the end of the century rainfall in Jordan will decrease 30 percent, temperatures will increase by six degrees Celsius and the number and duration of droughts will double.

‘When I bought the land a year and a half ago, I was so happy I started crying’ – Abu ElHajj

Abu ElHajj is proud of the 600 square metres of rocky arid land she has managed to turn into an increasingly fertile garden. She spent most of her life in Baqaa, the largest Palestinian refugee camp in Jordan. “I wasn’t happy with the atmosphere there. I got sick of the city. People live inside boxes, and there is so much traffic and pollution,” she tells MEE.
I could only afford this tiny piece of land. But when I bought it a year and a half ago, I was so happy I started crying,” says Abu ElHajj, whose parents were Palestinian refugees from the West Bank district of Hebron. I finally have my own land and I can see Palestine from here. It’s only a few kilometres away.

Her garden is right next to Greening The Desert, a project established ten years ago by the Australian permaculture expert Geoff Lawton. Lawton created a permaculture demonstration site where he is showing people how to live sustainably with limited water and resources. Developed in the 1970s by Australian biologists Bill Mollison and David Holmgren, permaculture – a contraction of permanent agriculture – is a design system that mimics natural systems. It seeks to integrate human activity with natural surroundings to create a sustainable ecosystem.  “Geoff taught us a lot of lovely things. He taught us how to work with nature, not against it,” says Abu ElHajj. Greening The Desert uses techniques like intercropping trees, water harvesting and resource recycling  Ten years ago the area was just a rocky hill in the Dead Sea valley. Experts have warned that the Dead Sea is on course to dry out. 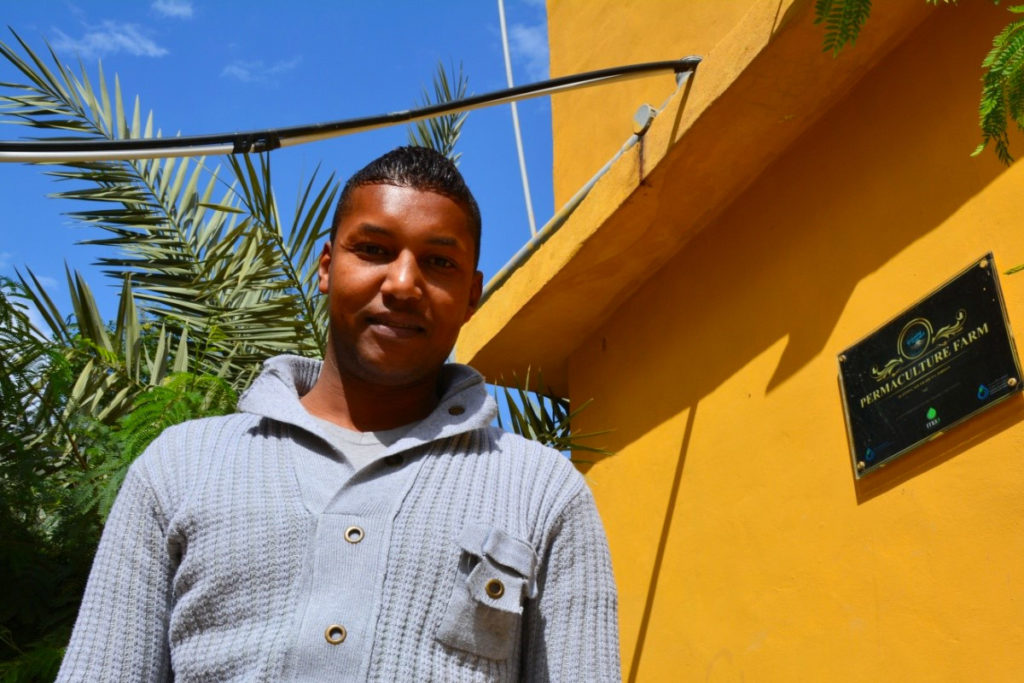 In 2015, Jordan and Israel signed an agreement to save the Dead Sea and improve access to water in the region. However, the deal has been delayed by diplomatic tensions, financial difficulties and environmentalist objections.  Extreme heat, dryness, and high salinity levels are making the Dead Sea valley, the lowest place on earth, an increasingly hostile environment. Lawton and his Jordanian wife Nadia were looking for land they could purchase in Jordan. They didn’t have a lot of money, so were only able to afford a 3,000 square metre plot with very poor soil in the Dead Sea valley. Lawton saw it as an opportunity to show the potential of permaculture techniques by transforming the arid land into a fertile forest garden.  “We funded Greening the Desert by ourselves, with our own work. We started very small,” Lawton tells MEE. After buying the land in 2008, Lawton and his team started by capturing all the water they could and establishing hardy trees and nitrogen-fixing plants that would provide the garden with anti-evaporation strategies.  Water from the showers and sinks began to be used to water the trees. In permaculture, all waste is reused, and water is always harvested. Ali al-Waheidi runs Greening The Desert’s eco-lodge and organic cafe  They then started increasing the diversity of species by including crops, herbs, and small animals like chickens and rabbits, which produce natural fertiliser.  A forest garden started flourishing in the desert.  “We proved that we can get great results even in incredibly difficult situations,” says Lawton. By implementing techniques like intercropping and using every niche and level to create different layers of plants, permaculture can produce more food using fewer resources.  Greening the Desert runs entirely on solar power and everything is recycled. The forest garden also functions as an institute, where both local communities and international visitors can learn about permaculture’s principles.

Hayel Abu Yahya was involved in building the project ten years ago. He was hired by Lawton, who runs another permaculture project in Australia, to manage the site. His family helps him with watering and harvesting, but like most permaculture projects, it requires little maintenance. Hayel Abu Yahya and his family manage Greening The Desert’s farm.
Along with twenty other families from nearby villages, Abu Yahya took the course taught by Lawton and learned to apply permaculture techniques.  “I come from a family of farmers. My parents used a lot of chemicals and we would grow the same kind of crops. With permaculture we can grow more things,” says Abu Yahya. “A lot of neighbouring families adopted the same techniques and started getting better results. They are producing large quantities of food in small gardens.”

Conventional farming is characterised by monocropping and the use of synthetic fertilisers, which reduce biodiversity and contribute to soil erosion and environmental degradation.Permaculture uses mulch and irrigation canals to restore the soil’s fertility.  Three-year-old Baha likes to help his father. He collects the chickens’ eggs every morning. (MEE/Marta Vidal) Even though it is a modern design system, permaculture draws on indigenous farming practices and traditional knowledge. Greening the Desert introduced forestry techniques, but also adopted local food processing and animal husbandry techniques. “We take a lot of traditional techniques on board,” says Lawton. “We can combat climate change with novel ecosystems. With a combination of native and non-native species, we can totally re-green the Middle East.” Greening the Desert tries to address sustainability issues, food security and water conservation. The project aims to show people how to provide for themselves in a way that also benefits the environment. ”We can solve all of the world’s problem in gardens,” says Lawton. He believes permaculture is the most effective way to fight against climate change, and that Greening the Desert’s model can be replicated throughout the region.

As one of the world’s most water-scarce and dry areas, the Middle East is particularly vulnerable to climate change. Jordan has been increasingly affected by floods, droughts and soil erosion.“Weather extremes are getting more common in Jordan,” says Safa’ al-Jayoussi, a climate change expert and advocate for environmental justice. For al-Jayoussi, permaculture’s use of renewable energy is particularly important. “Jordan has huge potential for renewable energy but we are still importing most of our energy from other countries,” she says. “We need a just transition from fossil fuels to renewable energy.” She believes grassroots movements like permaculture can inspire others in Jordan to become more engaged with environmental issues.  Some projects are also implementing permaculture techniques in urban spaces. Greening the Camps, a project run by international and Jordanian volunteers, is trying to spread rooftop gardens across refugee camps in Jordan. “Refugees can have a chance to grow their own food and be in closer contact with nature,” says the co-founder Machiel Van Nieuwenhove, a 27-year-old architect and designer from Belgium. The gardens aim at improving food security and living conditions in Jordan’s overcrowded refugee camps. Greening the Camps’ pilot project was established on the rooftop of Jadal, a social-cultural community centre in Amman. It has two greenhouses built with recycled materials and organic compost installations.  “We chose Jadal because it’s a community space where people can come together and learn from each other,” adds Van Nieuwenhove. The aim of the gardens is not only to care for the environment but also to look after the community. 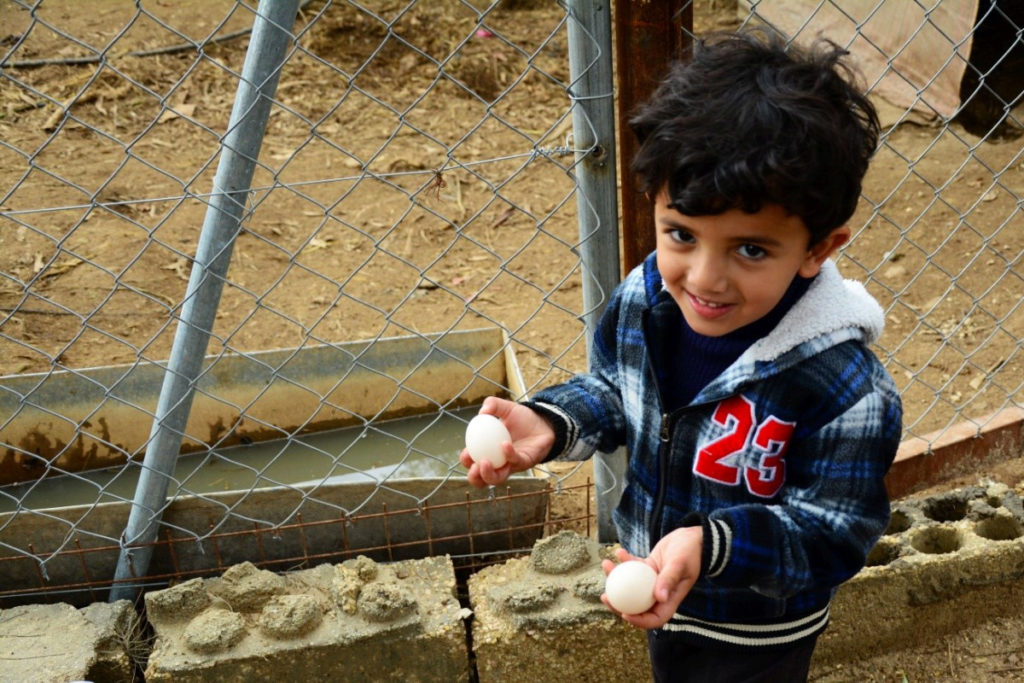